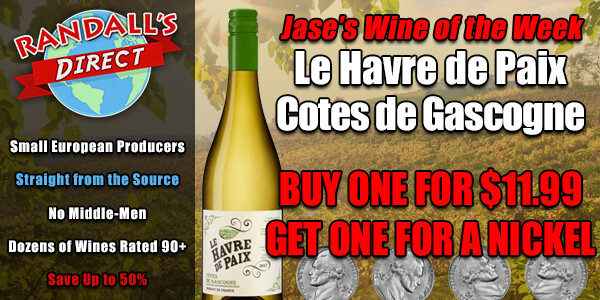 As we’re getting to the end of [the worst] summer [ever], there’s still a little time to enjoy one of life’s greatest simple pleasures: cold white wine on a hot day. And so this week’s pick is the Le Havre de Paix Cotes de Gascogne. And yes, I realize that even as French wines go, this one is difficult to pronounce. But stick with me, it’s worth it.

Like any good summer white, the Havre de Paix is perfectly crisp and refreshing. But owing to its home in the sunny Southwest of France, it’s also supremely ripe and generous. It has the kind of plump melon fruit that will keep your glass disappearing quickly. So much so that you might consider buying more than one. And it’s here, once again, that Randall’s has you covered. Because this week, when you buy one bottle of Havre de Paix for $11.99, we’ll sell you a second bottle for just a nickel.

If you’re not familiar, Cotes de Gascogne hails from the same region in Southwest France that produces Armagnac. (And if you’re not familiar with Armagnac, the South’s answer to Cognac, you’re really missing out. But we’ll talk about it later.) This is one of the few places in the Southwest where white wine is king, and wines labeled Cotes de Gascogne will often contain the same Ugni Blanc and Colombard grapes used in the production of Armagnac. But several other varieties are allowed as well, including Sauvignon Blanc, the grape that gives our Havre de Paix most of its aromatic character. Don’t sweat it though, if you’re not typically a fan of grassy, grapefruity Sauvignon Blanc. This isn’t like that. The blend, along with the climate, make Havre de Paix a different beast altogether.

The name Havre de Paix translates roughly as “peaceful refuge” or “safe haven.” It sounds positively serene, but I’d argue it does a lousy job representing the juice in the bottle. To my mind, this isn’t something you sip on your couch with a good book. You can, I’m not stopping you. But you might enjoy it a heck of a lot more prepping shrimp kabobs for the grill and moving your hips to the 2020 beach hits you should have been grooving to on that vacation you never got to take. It’s a wine that pairs well with sunshine, and you’d be well served to get while the getting is good.

Good Cotes de Gascogne is almost always an incredible value, but it’s doubly inexpensive when it’s one of our Randall’s Direct wines. By bringing the wine directly from France, we cut out two layers of markup. In the end, we’re able to offer you not one, but two bottles of summertime fun for just $12.04! If you don’t find that impressive, it probably means you haven’t tasted this stuff yet. And that’s a problem you can easily fix by stopping in at any of our Missouri stores, or by ordering online at ShopRandalls.com.

Pro tip: if you order it online, you won’t have to ask for it in store, and so you’ll never actually be required to pronounce it! 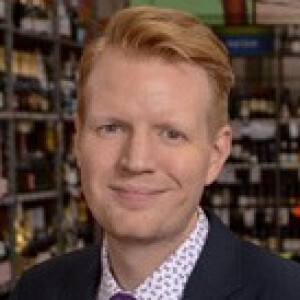 Jase has been a wine and spirits professional since 1998, and is currently the Operations Manager for the Randall's Wines and Spirits retail stores and web site. He's a Certified Sommelier, a pretty good cook, and a perfectly lousy guitarist.