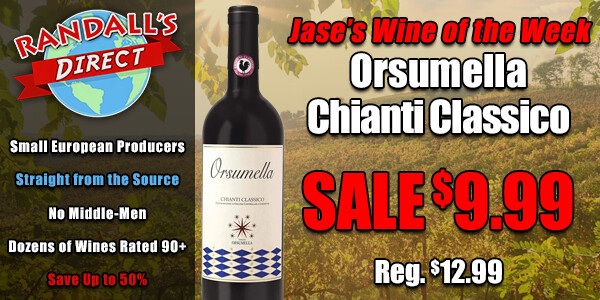 This week’s pick is the Orsumella Chianti Classico, a contemporarily styled Sangiovese with the sort of tart red fruit that smacks you in the face and demands your attention. Its ten months in French barrel contribute dimension and depth, while its abundant natural acidity keeps things lively and refreshing. It is delicious, and this week it’s only $9.99.

A word about Sangiovese…(And don’t worry, I’ll keep it short. Really, this time I mean it.)

Sangiovese is the most widely planted grape in all of Italy. It’s also the predominant grape (and sometimes the only grape) in the wines of Chianti. Wines from Sangiovese are not always as shouty and boastful as the ever-present French Varieties. They are not so predictably perfumed as Pinot Noir. Nor are they as weighty as Cabernet. But what they may lack in flash, they more than make up for in grace. As is often the case with Italian wine grapes, Sangiovese is, at its core, firmly acidic. It’s lithe, with excellent bone structure, and it’s a big hit at dinner parties. You don’t *need* to pair Sangiovese with food. It’s perfectly delicious on its own. But if you were to drink it on an empty stomach, you might find yourself feeling peckish. This is because the acid in the wine will cause you to salivate. This gets the digestion going, and well… you’d better have some salty snacks handy. Better yet if you’ve prepared a dish with tomato. As food-friendly wines go, Sangiovese is incredibly versatile, but the pairing of Chianti and red sauce is as cliché as it is 100% spot on.

To appease any wine geeks reading, I’m obliged to mention Brunello di Montalcino when discussing Sangiovese. That’s because a strong majority of wine critics, writers, sommeliers, and enthusiastic hobbyists will insist that the purest, most iconic examples of Sangiovese aren’t found in Chianti, but rather a few miles further south in the wines of Montalcino. But here’s the deal, they’re wrong. Brunello can be amazing. It can also be mediocre. But you’re going to pay too much regardless. Chianti Classico, on the other hand, is more consistently wonderful. And despite being one of the most recognizable names in wine, it’s still incredibly undervalued. Brunello is good, but also very fashionable. It’s sort of like jackfruit tacos or Apple stock splits. There’s nothing wrong with it, it’s just a little overhyped. If you want value for your money, Chianti is where it’s at.

Now here’s the part where I tell you not to take my word for it. If you’ve read this far, I do certainly appreciate it. But really, your time might have been better spent drinking. I could babble on all day about Chianti, but for $9.99, you ought to just try a bottle. This is, after all, world class stuff for next to nothing. We’re able to bring it to you at such a low price only because we’ve imported it ourselves. By cutting out the middle-men, we’re able to knock about 50% off the price of the wine. You can find the Orsumella Chianti Classico – along with over 200 amazing Randall’s Direct Wines – at ShopRandalls.com. Or, you could stop by any of our Missouri stores. Either way, love it or hate it (and I’m fairly certain you’re gonna love it), please let me know what you think. I’d love to hear your thoughts on Orsumella, Chianti, or Italian wine in general. As always, you can reach me at jase@internetliquor.com. I look forward to hearing from you.